When you share a blog post or site on social media, the first thing most people will see is a social card image, or "og:image". Adding one of these can massively increase the number of people who engage with your post. In the past, you either had to manually create these images or automatically generate them with a headless browser or service. However, Vercel recently launched a library that makes generating these images easier, faster, and cheaper. In this post, I’ll show you how you can use that library to generate social card images using Svelte components. Even though I’m focusing on Svelte, the concepts should transfer to any component framework that you can render to an HTML string.

What is og:image? permalink

A deep dive on this is outside the scope of this blog post, but I’ll give the tl;dr. An og:image is a type of <meta> tag that you put in your site’s <head>. Social media sites will use this information to display the given image when you share that URL. For instance, one of my recent blog posts looked like this on Twitter: 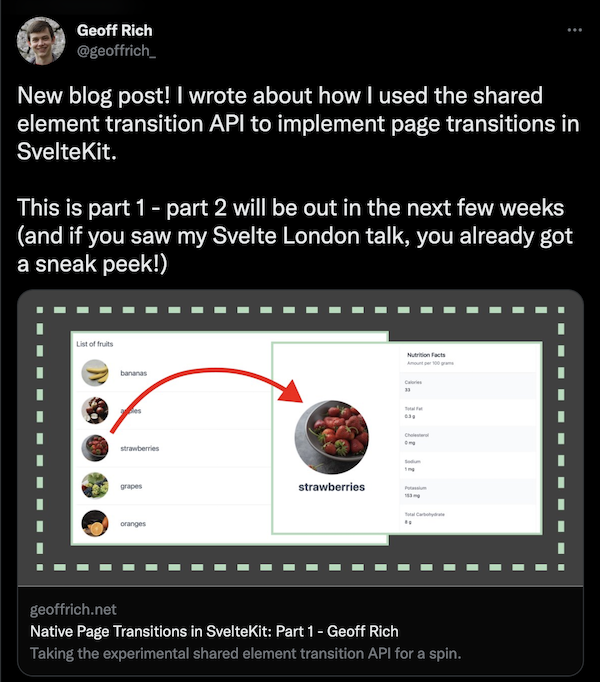 Swyx has a blog post that does a good job explaining what they are and why you would want them on your site (though the information around generating them is out of date).

While there are other meta tags to display information like title, author, description, and so on, we’ll focus on the image today.

Previously, if you wanted an og:image on your site, you had a few options:

In the past I tried using Puppeteer to generate my images, but ran into issues running locally (granted, I was on an old version of WSL at the time). I currently use the second option—I have a Figma template and update it for each post. This works, but it’s tedious. It is also time-consuming if I ever wanted to update my template for all previous posts. Some of my older blog posts still have an old card design that I don’t like but I haven’t updated them due to the time commitment.

Wouldn’t it be nice if there was an automated solution that was fast, easily deployable, and that could be configured using modern component syntax? Well…

Last week Vercel launched a new library to generate social card images. Instead of spinning up headless Chrome and taking screenshots, this library library converts HTML and a subset of CSS into images. This makes for a solution that is easier (you’re just writing HTML), 5x faster, and 100x more lightweight than running headless Chrome. For more tech details, see this Twitter thread by creator Shu Ding.

When I saw this my first thought was: how can I use this in SvelteKit, and with a Svelte component? Since I use Svelte for my personal projects, it would be a very nice dev experience to write my social images in Svelte.

Unfortunately, all the official examples use JSX syntax and I didn’t want to take a dependency on React. But it is possible—you just have to wire some things together. Here is what we’ll be working with:

So the code for this ends up looking something like this:

While the details here can get a little tricky, that’s not a lot of code! The pipeline ends being: Svelte → HTML → JSX → SVG → PNG. Whew!

(There might be a way to use @vercel/og directly with the same satori-html transform. This would give us less to implement, since @vercel/og will automatically construct a PNG response and allow you to use emoji, other languages, and Tailwind CSS. However, I ran into WASM errors when running locally with Vite. Vercel also specifies that @vercel/og is only compatible with the Edge Runtime.)

With the overview out of the way, let’s drill into the details.

Warning: both Satori and satori-html are pre-v1, so there could be breaking changes. This demo has been developed with satori@0.0.42 and satori-html@0.2.0.

To follow along, create a new SvelteKit app following the instructions on the SvelteKit homepage. Select the skeleton project template when prompted. I’ll be using JavaScript (with JSDoc) for this post, but you can select TypeScript if you like.

We’ll need a few dependencies, as mentioned above:

Satori also requires you to BYOF (bring your own fonts). It will use the raw font data to render any text to SVG paths. For this demo, download the Noto Sans font from Google Fonts. Unzip the folder and place the NotoSans-Regular.ttf file inside a folder at /src/lib.

Now that we have all the dependencies, let’s create a server endpoint that will generate OG images. We’ll start small, and just pass a "hello world" string for now. Once we get the basic image generation setup working, we can add a Svelte component.

Create a new file at src/routes/og/+server.js and paste in the following code:

This creates a SvelteKit server route that will generate OG images for us.

You might notice that we’re importing the font. This isn’t a valid import in regular JavaScript, so we’ll need to add a custom Vite plugin that turns that import into the font data Satori requires. Open vite.config.js and add the following code:

This will replace any import of a .ttf file with an export of the raw buffer data. If you need to import fonts elsewhere in your app, you may need to update this to only transform fonts needed for og:image generation. I did try Vite’s ?raw import syntax instead of a custom plugin, but that didn’t return the right format for Satori.

You can also fetch the font at runtime, either locally or from Google fonts. By bundling it with the app, we trade off a slightly larger server size for slightly less latency. If you expect to use multiple fonts, fetching at runtime may be a better solution.

(This is the part of the demo I’m least confident in, so if you have alternate solutions, please let me know. Thanks to Matt Jennings for showing me the custom Vite plugin approach!)

With that change, you should be able to run the app and navigate to /og and see the generated "Hello, world!" image. 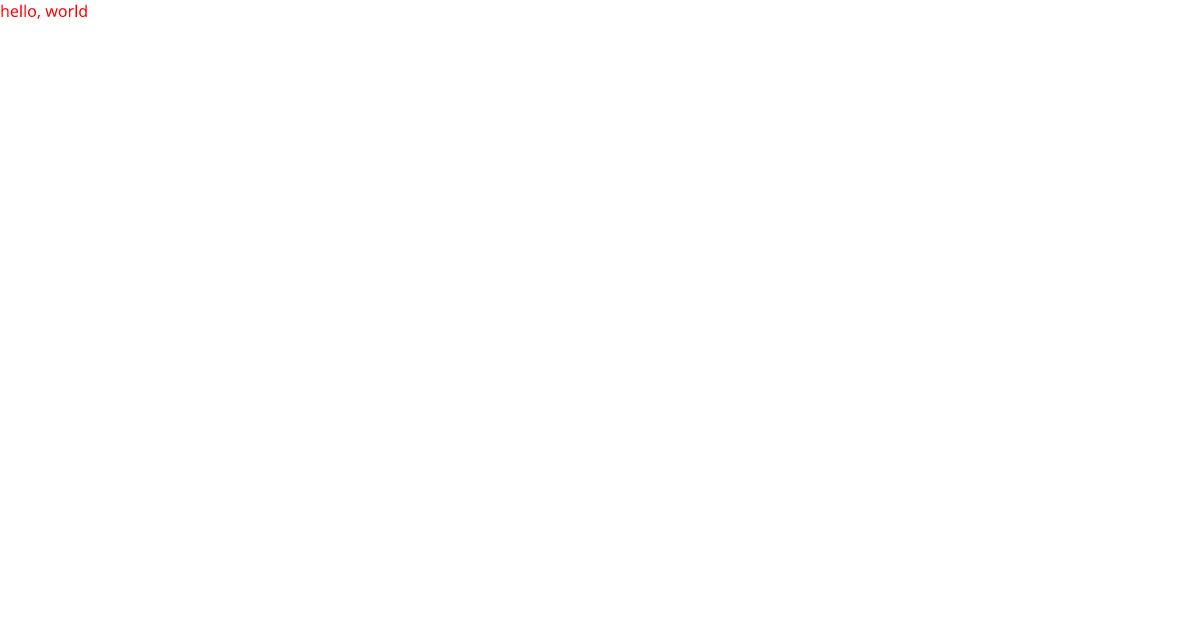 Wiring this up to a Svelte component permalink

Now that we have the basics working, let’s generate our markup from a Svelte component instead. Create a Card.svelte file inside the src/lib folder and move our "Hello, world!" content in there.

We can import this component on the server and use it to generate our HTML instead of writing it by hand. We’ll use the excellent satori-html library I had you install previously. Add the following imports to the top of our +server.js…

…and replace the hard-coded element definition with the following lines:

This renders the Card component to an object containing the raw HTML and CSS strings and uses satori-html to convert it to a JSX object.

If you navigate to /og you should see the same card as before—but it’s now being generated from a Svelte component! Let’s improve the card design by adding some styles. Satori normally only accepts inline styles, but satori-html will automatically convert CSS in a style tag to the format Satori expects.

(Be advised that Satori only implements a subset of CSS. In particular, you can’t use CSS Grid, only Flexbox. However, it’s usually enough to get the job done.) 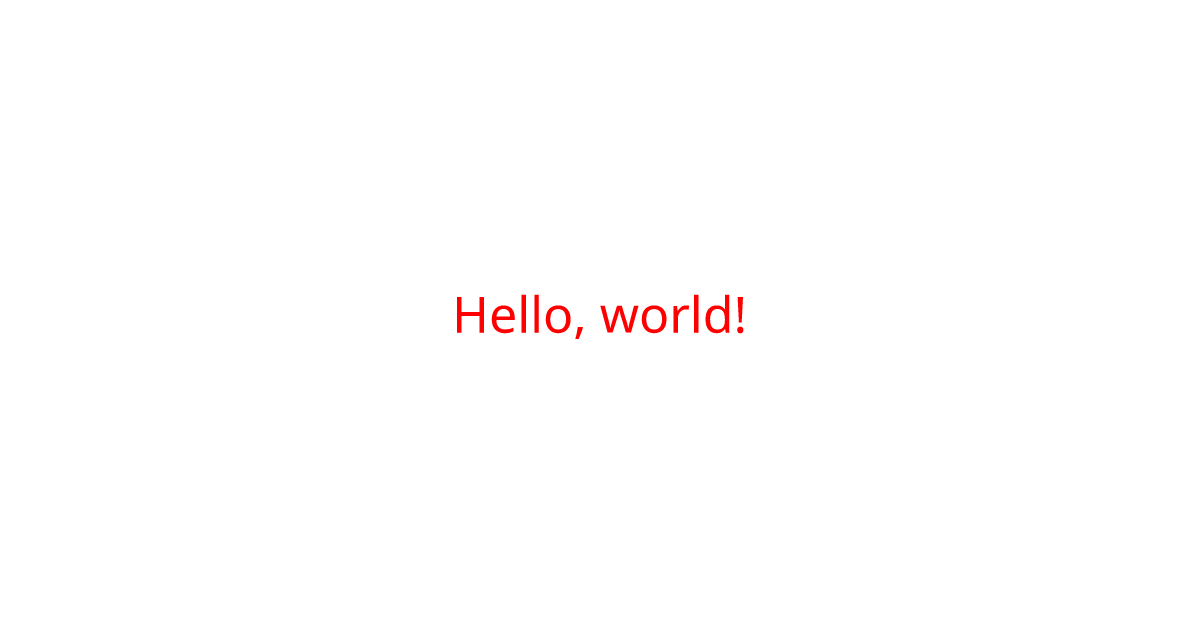 One nice thing about writing these styles as a Svelte component is that you can iterate quicker by rendering the component on a page, since pages will be hot-reloaded without needing to manually refresh. This is also easier to debug. Add the following to src/routes/+page.svelte

I’m hard-coding the card dimensions and linking up the font to match the Satori environment as closely as possible.

Now if you change the styles on the Card component (for example, changing background-color to lightblue), this page will update without refreshing. You can also inspect the component using the browser devtools to debug any CSS issues. While this is useful while developing, make sure to check the actual card at /og, since there will be differences due to the CSS limitations mentioned previously. Satori also has a debug option if you need to debug the rendered card.

So now we have an endpoint generating a social image, but it’s static—it will return the same image every time. Let’s change that. We can dynamically change the text displayed based on a query parameter. For instance, let's make it so requesting /og?message=Welcome will display the text "Welcome" instead.

First, let’s expose a prop from our Svelte component to set this text. We’ll default it to the text we had before.

Then, we need to get the message from the query and pass it to the render function.

(We have to default message to undefined since it will be null if it wasn’t passed in the URL. If we pass {message: null} to the component, it will display null instead of our default value.)

Then if we go to /og without passing query params, we’ll get the same image as before… 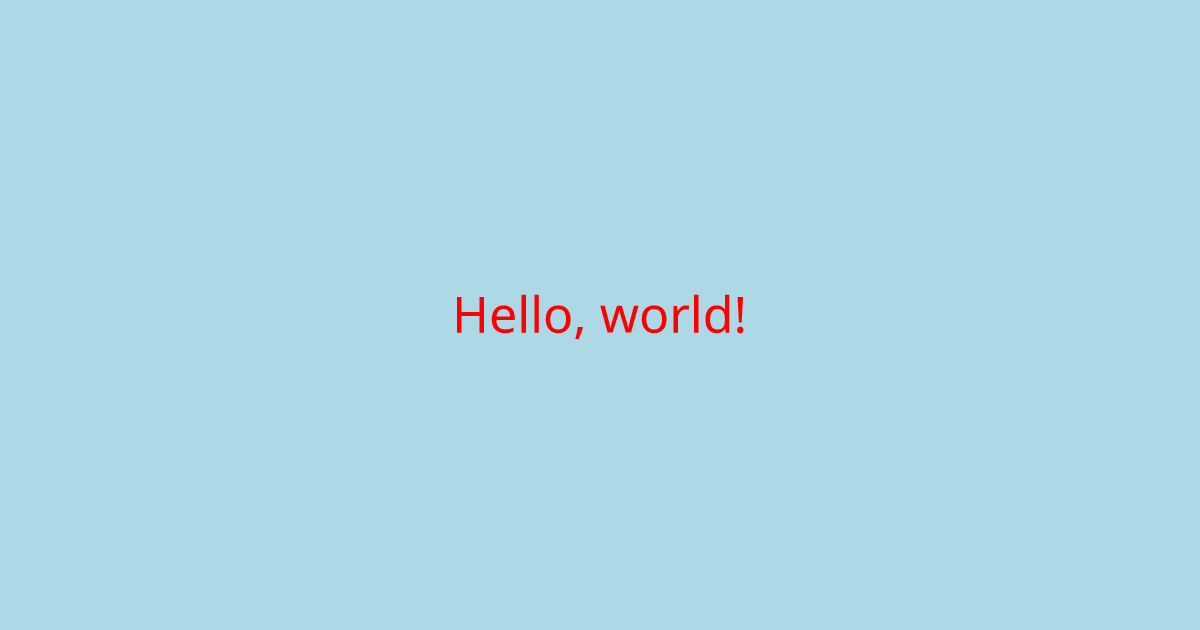 …but going to /og?message=Welcome! will display "Welcome!" instead. 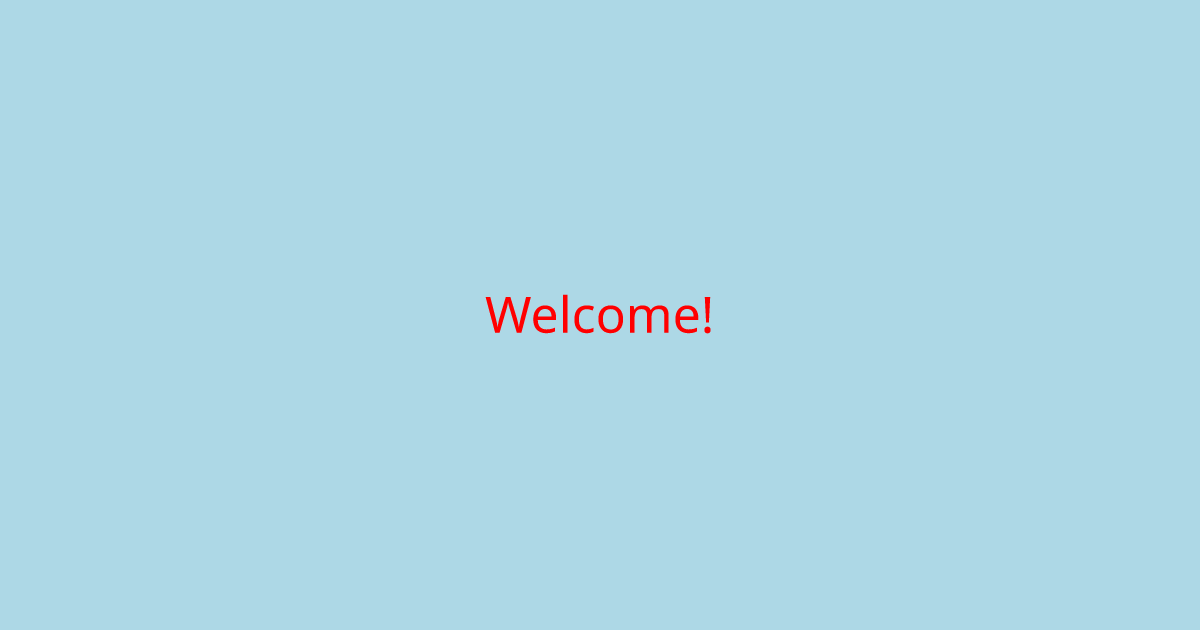 Putting it all together permalink

This is where the real power of a dynamic og:image endpoint comes into play. Because we have a parameterized endpoint, we can reuse it to generate images for multiple different pages. So in our root +page.svelte we might show an image that says "Home"…

…but show an image with a different message for our "About" page.

All using the same endpoint!

(Note that the URL is the full URL of the deployed site—the image won’t show on social previews if you use a relative URL.)

This can be incredibly useful for something like blog posts, where you could create a social image template for each post and just change the title for each one. And this can all be done through a single endpoint that’s located with the rest of your code and is easily customized with Svelte.

You can find the final code on my GitHub.

The card example in this post was intentionally super simple to focus on the generation side of things. Make sure to check out the Satori docs to see how you can also add images, emoji, and other languages. And of course, because you have HTML, CSS, and SVG available, just about anything you could do on the web you can now do in a social card (within Satori’s CSS limitations, of course).

Here are some other fun examples that use Satori:

I’m hoping to move this blog’s social images over to this method once I finish my SvelteKit rewrite (WIP!)

Want to find out when I post a new article? Follow me on Mastodon or Twitter or subscribe to my RSS feed. I also have an email newsletter that I'll send out when I post something new, along with anything else I find interesting.